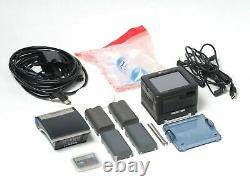 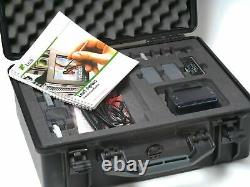 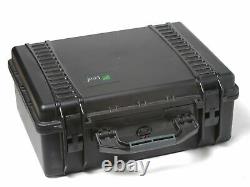 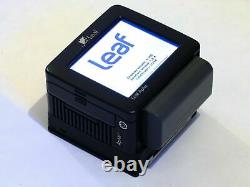 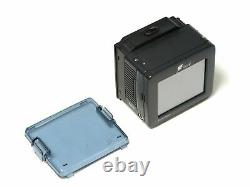 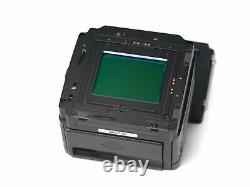 Up for sale is a stunning Leaf Aptus 75 digital back for Hasselblad V mount cameras, with a huge 48x36mm Dalsa CCD sensor. It is in great working condition and comes the original Leaf Peli case with most of the original accessories, plus memory card and a pair of brand new batteries (hard to source), and has been updated to the latest firmware. Back will be supplied reset to factory standard settings where possible.

See details below, and read the entire listing and see photos for condition. Back has done around 21.200 actions only.

The internal battery is dead though so doesn't save date settings - see note below about this. The full kit is a really nice turn-key setup to get you shooting straight away without having to source additional bits and bobs. 1x Leaf Aptus 75 back.

1x Original metal sensor cover. 2x original metal touchscreen stylus - one in the back, one spare in the case. 1x Original Leaf Peli case. 1x original Leaf batteries (doesn't hold much change now). 2x brand new replacement 2200mAh batteries - I have only used these a couple of times, but they are a HUGE improvement on the above original. Good quality ones too, not the cheap rubbish ones. 1x Sandisk Extreme 32gb Compact Flash memory card - only certain models of card work reliably with these backs, and this is one of them. 1x Sinar two-part sensor cleaning kit including a part-used pack of sensor cleaning tissues enough to keep you going for a good while!

1x White LCC plate for taking lens correction shots - 77mm filter thread on one side, Hasselblad Bay60 on the other. 1x Original Hahnel charger and mains lead. A bunch of adapter plates from the Hahnel charger to charge other types of battery.

1x Car fag-lighter adapter for the charger. 1x PC-sync-to-2.5mm audio jack sync lead - this is what you need to connect the back to normal Hasselblad C or CF lenses, or to copal shutters if you're using it on a large format setup with an adapter - I've done both, works really well. 1x PC-sync-to-proprietory connection - I think this may be for the motorised Blads or maybe those Mamiya RZ adapters you can get. 1x 2.5mm-to-2.5mm audio sync lead - no idea what camera this is for!

1x Original firewire cable - connects from the back to Firewire 400. Note you can't use any old firewire 400 cable with these backs - the connection on the back is deeply recessed so only the official Leaf cables will fit. 1x Mains adapter for the back - connects into the firewire socket so you can use a 12v mains adapter to run the back. 1x Original firewire/battery cover piece. 1x homemade acetate finder mask for the 48x36mm format to fit normal Hasselblad screens.

It's not work of art but it works. I will also throw in an old USB CF card reader, because I know most of us don't actually have CF readers on our computers any more. You can find a lot of info online about these backs, manuals and software are still available on the Leaf website. CaptureOne does a great job with the RAW files from these and has all the built-in special colour profiles and magic sauce to get the best from the files. The files from this back are great, incredible sharpness and clarity at base ISO.

Although this back is "only" 33mp never thought I'd hear myself say that! The 6726 x 5040 pixel files compete very well with the current Fuji GFX 44x33mm 50mp sensors - bigger sensor, the inimitable CCD look and contrast, bigger pixels. These backs punch well above their stated resolution, and occupy a sweet spot in the legendary "fat pixel" backs range, as unlike the older 22mp backs like the Phase P25 and Aptus 22 these still have a resolution which is competitive today, yet unlike higher resolution backs they are not too difficult to accurately focus on a Hasselblad V body. Also this back uses the professional 4:3 aspect ratio, which means if printing to standard paper aspect ratios you're not having the throw half your pixels away.

I've never seen or had issues with the "centrefold issue" you will read about from when these backs were new. I suspect Leaf fixed this at the time with custom gain files on the few backs that actually had the problems, but the old posts are still up on the various forums. Don't let it worry you, I've shot plenty of scenes with clear even toned skies with this back with no problems.

This back has a 6x7cm touch screen, which while a bit dated in terms of the technology it does actually let you check the focus at 100% very easily, unlike the Phase backs of a similar vintage with their tiny screens and no 100% view. Unlike the Phase backs it also doesn't need a wakeup cable if used on a large format camera. Also, the back can be mounted either horizontally or vertically on the camera, so is better than Hasselblad's own CFV backs which condemn you to horizontal only. If you intend to use with a ELM or ELX type model you might have trouble fitting the battery so may be limited to using the mains AC adaptor - do your research on this, I don't have one of those type of motorised cameras. Same goes for SWC cameras unless the camera's tripod foot has been sawn off you may not be able to get the battery on or mount the back vertically due to things fouling the tripod foot.

I briefly tested this back on my SWC (with the foot intact) just shooting tethered with no battery on at home, and was happy to find there didn't seem to be any issues with the 38mm Biogon lens. Will also work on the various adapters you can get for Mamiya RB/RZ cameras, Fuji GX series or large format. The user interface on these backs is actually pretty clever. Yes it's an old-school type touchscreen like your satnav from 2007, but once you've got everything setup then it's rare that you will actually need to use the touchscreen really. The only thing you're likely to need to adjust on the fly with the Leaf is the ISO setting.

However it's worth understanding the way these backs work from a tech viewpoint. They basically have one ISO level, the base ISO 50. If you shoot the back at say 100, 200 or 400 or whatever then the back doesn't actually boost the signal with hardware or anything like that - in fact all you are doing is shooting an image which is underexposed by 1, 2 or 3 stops then lifting the exposure as part of the raw processing (in this case so the back can produce the embedded JPEG preview image). So here's the secret tip - just leave the ISO set at 50 on the back, and when the light level drops to the point where you run out of handholdable shutter speeds just keep shooting underexposed images, and then lift them in your raw software, then you never need to touch the ISO setting menu on the back.

I actually ran tests shooting at ISO 400 versus shooting at ISO 50 at 3-stops underexposed, and then lifting by 3-stops in CaptureOne and the results were actually slightly better and slightly cleaner with the underexposed shots compared to the ones shot at "native" ISO 400. Probably because the back's raw processing is stuck in 2007, and I was using the current CaptureOne from 2021. Test it out for yourself.

The condition is very good used condition. There are some marks from general handing and use on the back and screen protector, but nothing untoward given its age.

Please inspect the images for yourself. The sensor is unmarked and unscratched except for a couple of dots toward the edge of the frame (if you look at the sensor at the right angle to the light you can see these). I don't know if these are marks in the cover glass or if they are debris that would clean off - I've only ever given this sensor a light clear with the clear cleaning fluid, never had the balls to try the blue stuff. The two dots only really show up shooting at the smallest aperture settings, and only then if they are against an even toned area in the image.

At small F-stops you'll be on a tripod anyway, so you will shoot an LCC image with the supplied white disk and apply it later in CaptureOne, so they map out pretty well, basically no more of an impact than the usual level of unavoidable dust. Shooting wide open to middle. Apertures they don't appear in the images anyway. The only other minor issue is, like most of the Leaf backs of this age, the internal battery is dead, which only means it doesn't save the date settings between shooting sessions.

However this doesn't really cause any impact as you can bulk edit the date in the EXIF data of the raw files with an EXIF editor if it bothers you. I just save the files in dated folders which means the dates on the files is. You can find tutorials online to replace the battery yourself easily enough if you're keen. It's just a small button cell. I was just happy to live with it to be honest!

This is a detailed and honest explanation of the digital back, it deserves a happy new home where it will be used to its full. I'm here to help with any questions.

This is strictly No Return Sale. The item "Leaf Aptus 75 33mp For Hasselblad V Digital Back" is in sale since Thursday, September 30, 2021.

This item is in the category "Cameras & Photography\Digital Cameras".vieira81" and is located in Edinburgh.

This item can be shipped worldwide.